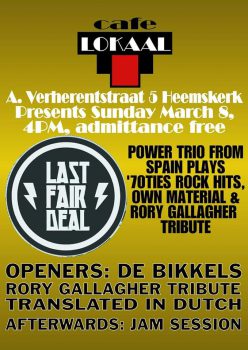 Last Fair Deal, a power trio from Spain, is known for their dynamic Rory Gallagher Tribute. Real, raw and passionate play, with the Spanish temperament. Over the last few years they also produced their own material on CD’s so they will play some original tunes too.
De Bikkels is a local band. All 4 big Rory fans. The singer has a degree in the Dutch language and thought it would be fun to translate Rory’s lyrics into Dutch. It turned out pretty good so the do a 45 minute set of Rory Tunes in Dutch! Try to sing along now!
So first De Bikkels, then Last Fair Deal and afterwards we predict a jamsession of musicians that stick around from the Wijk aan Zee tribute! Free of charge!